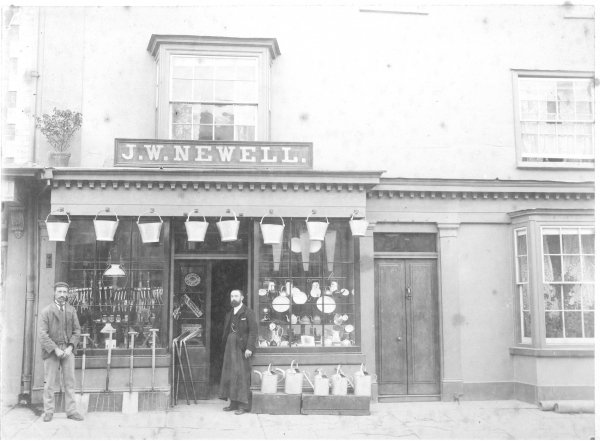 The Newells of Presteigne – Ironmongers Extraordinaire!

When Charles Newell of J. W. Newell & Son Ironmongers died in 1973, Presteigne lost a business that kept it supplied with an incredible range of items and services for over 200 years.

Now, The Judge’s Lodging Museum, which is just a stone’s throw from the old Newell premises, has opened an exhibition paying homage to this incredible family.  Bringing together some of the surviving shop stock, tools, paperwork  and photographs from the town’s collection, the Radnorshire Museum and the Museum of Welsh Life, along with items that were bought for this very building by the Victorian magistrates, The Newells of Presteigne – Ironmongers Extraordinaire takes the visitor through the history and activities of one local family.

Charlie was the last in a line of men who kept the family ironmonger’s shop, at 4/5 Broad Street, thriving through Presteigne’s boom and declining times. The Newell family survived through their ability to adapt and expand into all types of enterprises. For this was no ordinary ironmonger’s shop.  This was a little empire of trades, including tin-smithing, nail-making, clock & watch manufacture, beekeeping, rabbit breeding, bicycle sales, permits & licence provision and even hairdressing!

Highlights to see on display include John Newell’s reporters notebook from his time as the local newspaper correspondent in the 1880s, a very rare early nail-making machine and business ledgers showing the  detailed accounts of the local townsfolk. Visitors will also get a sense of the incredible range of stock you could purchase from them in their Broad Street shop, from its origins, right up until its closure – for Charlie had inherited not just the buildings, but much of the stock from the prosperous years of his father, John and grandfather, Edward.  On his death, over 3,000 items were taken into the care of the Museum of Welsh Life, St Fagans. Most of these things were in mint condition; many packaged in their original wrappings. As individual objects, they might appear to be very ordinary, but when considered as a whole, as the representative of a single business, they give a fascinating insight into the business of a 19th century ironmonger and the possessions of the inhabitants of a small town in Victorian Britain.

There are plenty of people in the area who still remember Charlie and bought things from him. They remember the shop and its jumble of stock. The name of the shop is still brightly painted over the doorway and the two premises it now forms have been given the honour of being called Newell House.  Why not come and see for yourself what this remarkable family did?  The exhibition is free to visit and is open until 22nd December.

You can see the poster for this exhibition here