New Board seeks to raise the bar!

New Board seeks to raise the bar! 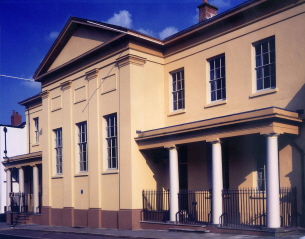 The Judge’s Lodging in Presteigne has recruited a fresh board of Trustees as it moves into a new phase of development. Since its opening in 1997, the former Radnorshire Shire Hall has established itself as one of the most immersive small museums in the UK, winning numerous awards and welcoming tourists and school groups alike.

Earlier this year, in response to changes to the museum’s funding, the charity’s Trustees reviewed the options for the museum and undertook a thorough review. Keith Slater, the outgoing Chair said “The Judge’s Lodging needs to be well placed to benefit from future opportunities. We had a close look at the skills needed to help the museum succeed for Presteigne and the surrounding area, and began a process of change. We’re very grateful for the voluntary time that all past Trustees have put in, and have every confidence in the new appointments.”

The new Chair of The Judge’s Lodging Trust, entrepreneur and consultant Ashley Charlwood noted that “The former Trustees did a huge amount of excellent work with Powys County Council in establishing this amazing attraction. We know there is a lot of local goodwill, and further afield there is a real admiration for the hidden-gem of the Welsh borders. We’re excited to take it forward.“

The Trust faces some immediate challenges, but the new Board is enthusiastic to ensure that The Judge’s Lodging continues to punch above its weight, to promote Presteigne and the Marches area, and to preserve the local museum collection.

The Judge’s Lodging Trustees working with Ashley Charlwood include architectural historian Sophie Andreae, and writer and historian Catherine Beale, both of whom were on the former board. They are joined by Diane Gwilt, Keeper – Collection Services, Amgueddfa Cymru – National Museum Wales, and Dr Elizabeth Dollimore, Outreach and Primary Learning Manager at the Shakespeare Birthplace Trust.

Gaby Rivers will continue to run the attraction as Museum Development Manager, working for the Trust. She is anticipating “an exciting period for both myself and the museum. We know there is a lot to be done, but the staff and I love opening the doors and working towards giving visitors the best experience possible of a genuine Victorian House, where they can truly immerse themselves in the atmosphere. We’re bursting with new ideas.” Joking about the building’s legal past, she adds, “we really want to do the Museum justice!”