See us on TV this Autumn & Winter

See us on TV this Autumn & Winter

The Christmas special will be aired on S4C on 28th December at 7pm, repeated on 31st at 2.15pm. The next 6 episodes of the series then kick off on 12th January 2011 at 8.25pm. See Tudur trying his hand at cutting down his own tree and dragging it to the house, whilst Bethan makes decorations and helps chef Padrig Jones with the traditional roast dinner and the huge 10lb Christmas pudding! 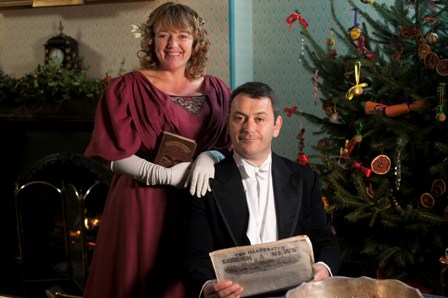 S4C’s new programme on Victorian household management, Byw yn ôl y Llyfr (Living by the Book) kicks off on Wed 15th September. This 12 part series has been filmed largely at The Judge’s Lodging and in the area. Staff at the museum have had a wonderful time through the year welcoming the film crew and presenters  – comedian Tudur Owen and writer/presenter Bethan Gwanas – to the building.

The series is based on a Welsh language Victorian self-help manual – Llyfr Pawb ar Bob Peth (“Everyone’s Book on Everything“) published around 1870 and follows Bethan & Tudur as they don period clothing and  try to follow the book’s advice on all manner of things, ranging from DIY to social etiquette, learning about the values of Victorian society in the process. We really want to spread the word, as it truly looks like a series not only to inform you but have you crying with laughter. Just the site of Bethan sniffing our garden soil in full costume to cure TB really was funny recently!

To find out a bit more about what has been going on,  see S4C’s own press release here and look at our original news item, involving flaming nighties and pigs’ ears here

For those who do not get S4C or are not used to watching it, you can get subtitles and if you can’t pick up the channel on your television, it is available to watch live or on ‘catch up’ through the S4C website.  So there is no excuse not to join in the fun!

S4C have been so pleased with how the series is looking that they have just commissioned a Christmas special, to be filmed at the museum in October  – and yes, that does mean we are getting our huge Christmas tree up rather early this year!

…and if you look out you may even spot our very own Museum Assistant, Dave Frazer, who appears as an extra several times!